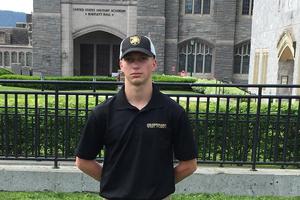 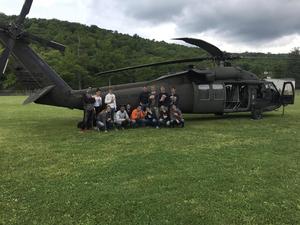 With his eye on a military academy, Senior Owen Grile had two unique experiences this summer that is preparing him for the next level.

One year from now, senior Owen Grile hopes to attend West Point and this summer he had the chance to experience life at the U.S. Military Academy in the Summer Leaders Experience (SLE) in early June. The Cadet candidates went through a small version of R-Day (Reception Day), then the rest of the week consisted of academic workshops, physical training, admissions briefings and a lot of marching. They spent one day at Camp Buckner learning combative training, gun firing and military tactics. He wanted to attend West Point because of what the Academy stands for, but to also be part of something bigger than himself, “SLE really fueled my passion and desire to go to West Point. I enjoyed the military feel, the structure and the productivity. I took away all of the unique experiences West Point has to offer while learning that it takes a well-rounded candidate to make it into, and at, West Point.”


A few weeks later, Grile also attended Michigan Boys State, a week-long event where attendees create an imaginary state. They run for city, county and state government positions. Grile ran for and won the Mayor position in his city making the final decisions on city ordinances, budgets and bills. He also met with other mayors and state officials during the week. “Going to boys state really gave me a taste of how our government runs.  It also allowed me to be in a leadership position. Boys State is a valuable program to list on my application for any United States Service Academy,” he says. After graduation, Grile plans to attend a service academy, preferably West Point, or attend a college through an Army ROTC program. The Otsego Rotary sponsored Grile for this opportunity.