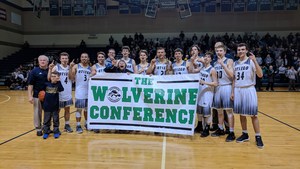 It was an exciting night as Otsego won it's 18th straight game and captured the Wolverine Conference title.
Otsego’s boys basketball team started the season 1-1, losing to Dowagiac in game 2, but that would be the last regular season loss for the Bulldogs who faced off with Dowagiac once again in the Wolverine Conference Championship game. The Bulldogs won 54-49. They ended the regular season 19-1 and set a school record by winning 18 straight games. "The reason for the 19-1 record this year comes down to teamwork. The whole team has bought into the system that has been put in place and they don't care who scores points, gets rebounds, or makes a steal. They all want to win and will do what it takes to get the job done; while cheering on their teammate to do well at the same time," says Coach Matt Dennis.
This team is also putting up some other impressive stats in the school record books:
"The other thing that makes this team special is that we have so many players who can score. When you mix an unselfish attitude with players who know how to shoot, pass and dribble our team is really hard to guard. You can't just stop one person, you have to stop the whole team to beat us," Dennis adds.
The boys enter Districts on Wednesday at 5:30pm at OHS vs. Wayland.