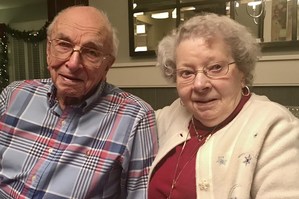 An alumni donation has created a life-changing opportunity for students pursuing higher education after graduation by sponsoring four scholarships based on character and community service.

The Character Scholarships will be awarded to four OHS seniors. Two of them will be 4-year renewable scholarships of $20,000 ($5,000 each year) granted to students demonstrating either “High Moral Character” (including courage, honesty, determination, empathy and loyalty), or “Outstanding Community Service”. The other two scholarships will be 2-year renewable scholarships of $5,000 ($2,500 each year) and granted to students attending a community college or vocational program, with one scholarship being awarded to a student demonstrating an unusual ability to accomplish goals through hard work or perseverance. Another scholarship will be awarded to a student demonstrating an unusually high level of skill or talent, with a passion to grow those strengths to a higher level. “While academic achievement is very important, strong character traits are even more important in determining a person’s success in life, and we thought it would be good to encourage students and their parents to advance those traits and to reward them for it,” the Winkels noted.

Ray and Bernie moved to Otsego, along with their four children, in 1956, and operated the Winkel Funeral Home there for 28 years until they retired in 1984 and transitioned the business to their son and daughter-in-law, Jim and Jo Ann Winkel, who continued to run the business until they retired in 2015.  The Winkels also have two daughters, Carol (Don) Wuebbling, residing in Ohio, and Judy (Tim) Conroy, residing in Connecticut.  Ray and Bernie continued to live in Otsego until 2012, when they moved to The Fountains retirement community in Kalamazoo, where they currently reside.  Ray, 95, and Bernie, 93, will celebrate their 72nd wedding anniversary in March.

In designing these scholarships, Tom and Carol considered the strong character traits Ray and Bernie showed in running a successful business and raising their family in the small community of Otsego, and in their many years of service and support to the community and to the families living there.  “My family and the entire community were fortunate to have the great examples Mom and Dad provided, and still demonstrate.”  They added “Growing up in a small town like Otsego gives students a phenomenal opportunity to experience comradery with their fellow students, and a strong connection to the community.  Some students in larger cities often miss out on having those tight bonds.  Even though Carol and I live in Grand Rapids and haven’t lived in Otsego for almost 50 years, we still have fond memories of growing up and attending the wonderful schools there.  These scholarships are meant to both honor my parents for their strong character and service to Otsego, and to also give something back to the great little community we still think of as home.”

“We are extremely excited about this recent addition to the scholarships being made available to the graduates of Otsego High School,” says Larry Collier, Chairman of the Otsego Public Schools Foundation, “These valuable Character Scholarships will give students with a high-level need for financial support, and a track record of strong character traits, the ability to advance their education to a higher level.”

Applications for these scholarships are available online at the Foundation’s website: www.opsfoundation.org/scholarships. In addition to the application submitted by the student, high school teachers, counseling staff and fellow students will be invited to make recommendations on qualified students. The deadline for these scholarships is March 16, 2018. The first set of scholarships will be awarded at the Swingout program to be held on May 23, 2018.