Otsego to be on Global Stage 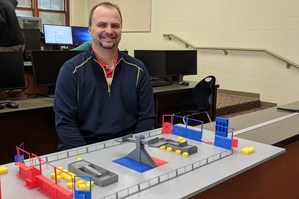 Otsego students have been ahead of the curve when it comes to 3D projects in the classroom; and, this week, technology teacher Michael Miller will showcase what he does in Otsego at a conference in London.

Otsego will be featured on a global stage this week! Technology teacher Michael Miller is a presenter at the Bett Seminar in London, an international technology conference with more than 34,000 people in attendance. His presentation is called “Bridging the 21st century skills gap with 3D printing in classrooms. Miller has been 3D printing in classrooms at Otsego for several years now and will have the opportunity to show an international audience of educators exactly how, “It’s exciting to have that opportunity to show what we’re going and have fun,” Miller says.


Miller is a part of the Dremel Ambassador program; when Dremel asked if anyone would be willing to go to London for a presentation he threw his name in for the opportunity and was chosen. He’s given a similar presentation at the ISTE (International Society for Technology in Education) summer conference in California for Tinkercad, a software program he uses for 3D printing. He will give a half-hour presentation on Wednesday to several hundred people, mostly principals and teachers, but with the interest garnered from that, he’ll be available to talk with educators one on one, visit other areas of the conference and do demonstrations to talk about 3D printing in the classroom. He’ll be at the conference through next Sunday.


His presentation consists of examples of what he has done with students at Otsego at Tech Camp, how it’s used in Robotics and in the classroom; he also has examples of how students have taken it upon themselves to use 3D printing for projects in other classes outside of Miller’s Computer Science course. “I think what we do here (in Otsego) is different; it’s not mainstream.


“I’m passionate about what I do and most excited to share what I’m doing with other people,” Miller says. At the same time, he expects to gain a lot out of the experience and hopes to learn more to bring back to Otsego, “The chance to see another country and another conference and what they’re doing and what’s different. There’s going to be a lot of opportunity to connect with other people and teachers and see what they’re doing.”


One of his latest print projects has been a model of the course for the FIRST Robotics 2018 challenge, “I can now talk to the kids and talk about strategy in a way we never could,” Miller explains, “We don’t have a course we can go out and look at; there are some different options that are available that weren’t before that 3D, in general, allows you to do.”


While he’s gone, he’ll be interacting with his students back in Otsego through Google Classroom and posting new, fun things he sees, “Hopefully it’s going to be a fun opportunity.”