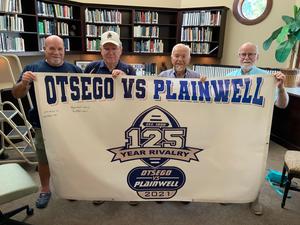 Join us and bulldogs from past and present to get excited for the 125th anniversary football game of the Plainwell-Otsego rivalry!

It’s the 2nd oldest football rivalry in the state - Otsego vs. Plainwell - but the Bulldogs and Trojans will likely argue it’s the best one around.


The first game against these neighboring towns dates back to 1896. Now, 125 years later, they face off again on Thursday, August 26th at 7pm at Plainwell High School’s Streidel Field, in the teams’ first game of the season.


In more recent decades, the two towns have joined forces for charity, have become friends with other athletes as they play on the same travel teams, and work together in educational settings; however, there’s no doubt that a bit of ego surfaces when the Bulldogs and Trojans face each other in an athletic contest.


We all know that you can’t predict the outcome of a rivalry game, regardless of record. And this year, there will be no record going into the contest. The Otsego vs. Plainwell football game is the first of the season for both teams, and some former Bulldog football standouts want to be sure the new generation is ready for the rivalry.


Graduates from 1958 and 1964 have come together over the last few weeks to plan a community pep rally, to get everyone excited and geared up to cheer on our bulldogs in this milestone contest. Otsego is gathering the 2021 football team, cheerleaders, and band with the stars of the past for a special community pep rally on Tuesday, August 24, 2021 at Bulldog Stadium. Several speakers are lined up representing several decades of Bulldog Football.


“The true idea of the rally is to get the community excited about the game and ready to cheer on our boys in their first game of the season,” says 1958 graduate Howard Misner. “We want to flood the visitor side with bulldog pride and celebrate this rivalry.” The rally will be held in the stadium and organizers are hoping for a big crowd.